Spite Houses are the resulting combination of a reason to despise someone, and enough land and resources to leave a sizable monument of retribution. In some cases, these retributions are well deserved, and in others it’s the result of adults acting like spoiled children. At times, these spite houses serve as homes, and others serve as little more than an eyesore. Whatever the case, the stories behind most of the well known spite houses are rather laughable.

There are two stories about this house built in 1716, in Marblehead, Massachusetts. The first is that two brothers inherited the house, and couldn’t stand each other. So, instead of one selling to the other, he just decided to build a ten foot wide home to live there and spite his brother. Because, if you are miserable with your brother, it only makes sense to want to live in a prison cell sized home right next to him.

The second theory is that the ten foot wide home was constructed to block the scenic view of two other family members, due to spite over inheriting such a small piece of the father’s estate. Seems colonials had their own precursors to the modern day dysfunctional family sitcoms. 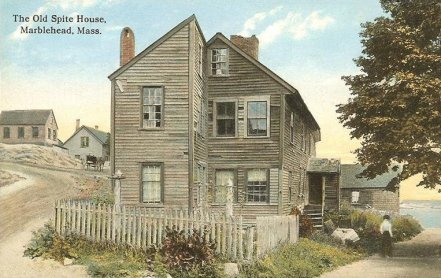 This home was built in Phippsburg, Maine, in 1806. Thomas McCobb, heir to his father’s land and shipbuilding business, built this home directly in front of the “Mansion in the Wilderness,” which was inherited by his step brother. The home was moved in 1925 to Deadman’s Point in Rockport, Maine by barge.

This house was built in 1814 by Dr. John Tyler, the first American born ophthalmologist to perform cataract operation. He had learned that the city was planning to extend Record Street through Tyler’s land. In his search to stop the extension, he found a law inhibiting roads from being built where a substantial building was being constructed. He immediately had the foundation poured, and the road crews discovered it the next morning.

“The Skinny House” was built in the North End of Boston, Massachusetts, in 1874. There were two brothers that inherited a part of their father’s property (sounds familiar). While one brother was serving in the military, the other built a large home, leaving only a tiny piece of land that he thought was too small to build on. When the soldier returned, he built a very skinny home, high enough to block the sunlight from coming into his brother’s home, ruining the view.

In the 19th century, a Freeport, New York developer was agitated by the city’s grid development plan. He built the Victorian “Freeport Spite House” on a triangular plot of land, virtually overnight to throw off the development plan. Now that’s tenacity! 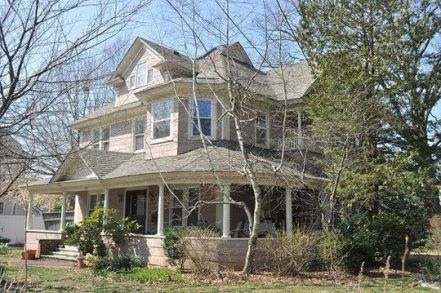 Charles Froling was vexed when the city of Alameda, California decided to take a large portion of his inherited land to build a road. He had hoped to build his dream home on it. To spite the city, and an unsympathetic neighbor, he built the “Alameda Spite House” between the road and the neighbor. The house is 54 feet long, 10 feet wide, and 20 feet high, and nearly touches his neighbor’s home

In 1908, Francis O’Reilly owned an investment parcel of land in Cambridge, Massachusetts (there’s that state again). His abutting neighbor declined buying the land from O’Reilly, who was looking to make a profit. In spite, he decided to build a 37 foot long, 8 foot wide building. It’s currently occupied by an interior decorating firm.

In 1925, in Montlake, Seattle, Washington, the “Montlake Spite House” was constructed in response to a neighbor making an insultingly low offer on the tiny parcel of land. The house is 860 square feet, 55 inches wide at the south end, and 15 feet wide at the North end. It was built this way simply to block the neighbor’s open space. Seems people don’t take kindly to cheap neighbors.

In 2013, Aaron Jackson, and LGBT rights activist and founder of Planting Peace, was checking out Westboro Baptist Church on Google Maps. This church was widely known for being against everything Aaron Jackson stood for. He noticed there was a home for sale across the street from the church and immediately bought it. He painted it up like the rainbow flag to spite the church. He reports that most of the attention that would be on the church, is now turning towards his home.